The Art of the Self Portrait - Feature interview: Yulia

The Art of the Self Portrait.

I am doing a feature for Coloursmag and this is the Second interview, i've decided to share it here as well. 'Photography is my best friend, my medicine, and a game.' Yulia

1. Fill me in on your background, where are you from and
how did you get in to photography?

My name is Yulia Gorodinski and I am 25 years old. I was born in Belarus and at the age of twelve my family and I immigrated to Israel, i live in a small town Ashdod near the sea.

I have been into photography for about two years and a half and I am self taught. Once I was chatting on Skype with an Italian guy and he sent me a link to his Flickr page that I could see his pictures, not artistic pictures, just snapshots. Then I started browsing the website and I stumbled upon some gorgeous works and those were self portraits of girls. I loved those pictures so much, I was in awe. Since then I wanted to have pictures like those too. At the beginning I had a point and shoot camera. Then a few months later I bought a DSLR, then I started to experiment.

Today I can't live without taking pictures, not necessarily self portraits, just any pictures. No one in particular really, I just have a strong passion for photography. 3. Why do you prefer to take self portraits?

I love to be both in front and behind the lens, i want the composition to belong entirely to me.

I find both modeling and shooting work interesting and challenging and I love doing both. I compare modeling to acting in a movie, of course these are not the same things, but I find similarities in them. Once I thought that modeling is easy but as taking my own picture I discovered that it really is not, at least not when you want to take a conceptual photograph. The way you portray a certain feeling or situation has to look genuine and not fake, i think a successful photo very much depends on a model as well. And speaking about models, I don’t have any other people to photograph except myself, i love acting and I love shooting. I have a complete control over the way I want a photograph to look like because I am the model and the photographer. I also want to have artistic pictures of myself, and because I can take a picture by myself I don't need to pay another photographer to do it for me. I often feel lonely; photography is my best friend, my medicine, and a game. 4. What is your process when taking self portraits from
getting ideas to editing?

Sometimes I do not have any idea of what I want to shoot, so I just go to a certain location and improvise. Sometimes I have an idea, which can be inspired by the way I feel, music video, song lyrics, stories, other artists, clothes,things I see, for instance a big raw fish that once I saw in a supermarket (haven't done a photo with it yet, maybe some day). So when I have time and when I don't have time, I go to a certain place with my camera, tripod and remote control, and sometimes carry things like clothes, shoes, and other props for the shoot with me.

If I take a picture outside there are usually people, who stare and ask questions about what I am doing and what I am shooting and why and whether I would let them help me. I feel just a little bit embarrassed taking pictures around people, but I don't really mind so much. I can deal with onlookers.

Usually it takes many shots to get the right picture. After taking pictures, I choose one I like most and I edit it in Photoshop. Usually I like giving them a vintage look; I am in love with all things vintage. 6. Where do you hope to go with you photography and self
portraits? 7. Why do you think people are drawn to self portraits and
what is you impression of the people that think it's just
narcissistic?

I think people are drawn to self portraits because they are attracted to sincerity and genuineness that is in it. The photographer and the model is the same person, people get to know you, and they are interested to know more about you and to see how you grow as an artist. 8. Who are some other self portrait artists that you
admire?

9. What is your best tip to taking a self portrait?

Be brave and daring.

10. Your photos seem to incorporate your surroundings, is
this a big part of your style?

Not really, this is just what's available. 11. Who has been your biggest influence in your photography
work and where do you look for inspiration for your work?

No one specific, I am inspired by different things, my feelings, films, surroundings, songs, books, other artists.

12. What are some of your favourate films, books and musicians?

Books:Assassination of Mozart by David Weiss and The Agony and the Ecstasy: A Biographical Novel of Michelangelo by Irving Stone.

13. What has been your biggest achievement so far with your
photography?

I had a group exhibition in Barcelona and have been featured in a fashion magazine.

14. Which self portrait artist do you think i should
interview next and why? 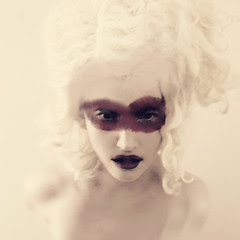 Originally uploaded by °Kristamas is haunted
Thank you Yulia, see more of her work here: http://www.flickr.com/photos/12634360@N08/

You can buy her prints here: http://www.redbubble.com/people/yullie?utm_source=RB&utm_medium=banner&utm_campaign=promo_badge_buy_at_rb